I just submitted my PhD thesis so I got some spare time1. I decided to jump on the current AI bandwagon: Stable Diffusion. Very recently I received access to OpenAI DALL-E, but DALL-E runs on the cloud, not locally2. Stable Diffusion can run locally, but with a substantial requirement: modern GPU. I have a ROG Zephyrus 20203 laptop, which I think would be good enough for this small experiment.

I downloaded CompVis/stable-diffusion git repo as zip archive and extracted its content. 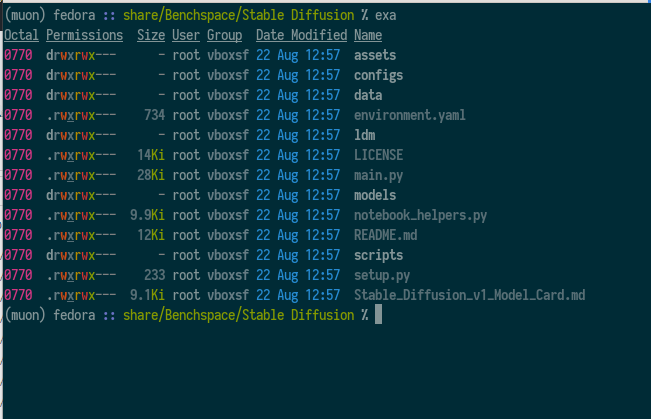 With the application extracted, I created stable-diffusion-v1 folder within models/ldm/ and downloaded the sd-v1-4.ckpt as model.ckpt into this newly-created directory. This is a 4GB download, jsyk.

Creating a new conda environment for Stable Diffusion takes time; it needs to download several packages5. Once the environment ldm activated, it is now ready.

I had no idea what was going to happen when I issued this command in the application root directory:

… and soon after, it started downloading more stuff, more than 2 GB of data. I had no idea what were these, so I started investigating. 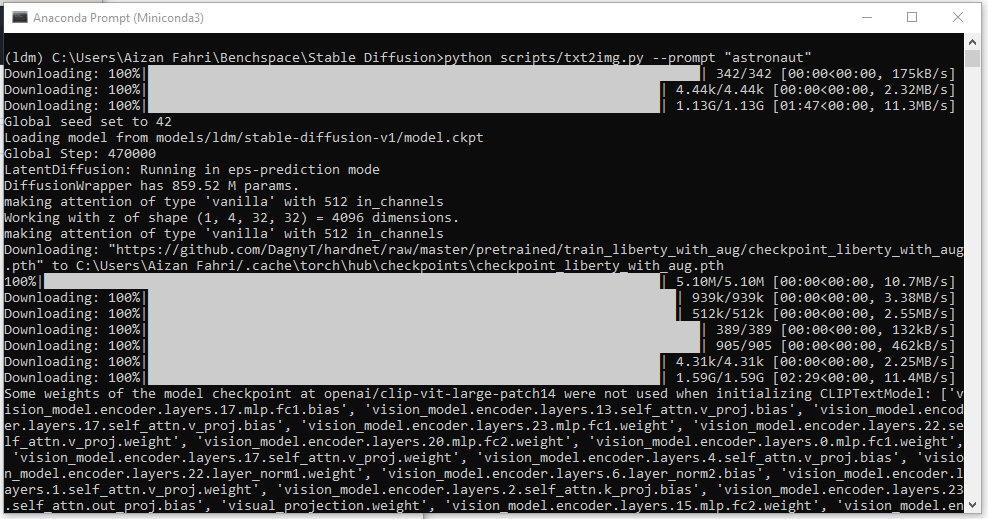 But before I started investigating, I got error from CUDA. 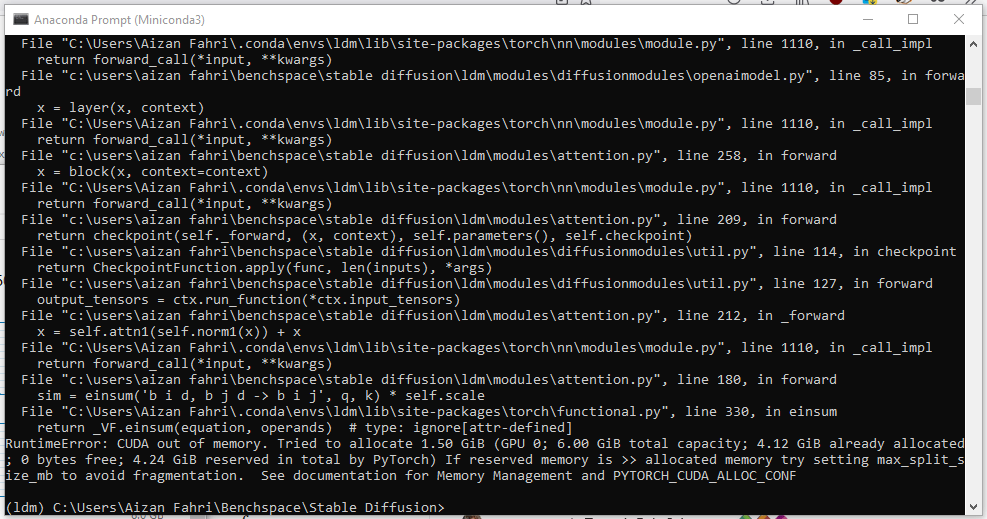 I tried re-running again and monitored the GPU VRAM usage:

It got that huge increase hitting around 5.8GB of VRAM and then it stopped…. Well, this was not great. Clearly here 6GB of dedicated VRAM was not enough. I tweaked the command in several ways; (i) using --W and --H down to 64 (from default 512?) to reduce the resolution, did not work; (ii) running with --plms (no idea what it does), still did not work; (iii) decreased the iteration and samples with --n_iter 2 & --n_samples 1, still did not work.

I guess I would need a faster and beefier GPU. So… time to rent one?

As of note, at time of writing there existed Stable Diffusion forks: bes-dev/stable_diffusion.openvino for running on Intel CPU; hlky/stable-diffusion comes with “idiot-proof web GUI”; and basujindal/stable-diffusion reportedly can run on GPU with smaller dedicated VRAM.

I was interested to run basujindal/stable-diffusion fork because their documentation said just download the optimizedSD folder instead of cloning the whole repo from scratch.

No more error due to insufficient VRAM. It topped at 3.7GB VRAM and running quite hot (70 °C, very audible fan) and it took very long to finish. I did not measure how long, but maybe roughly 40 minutes6. 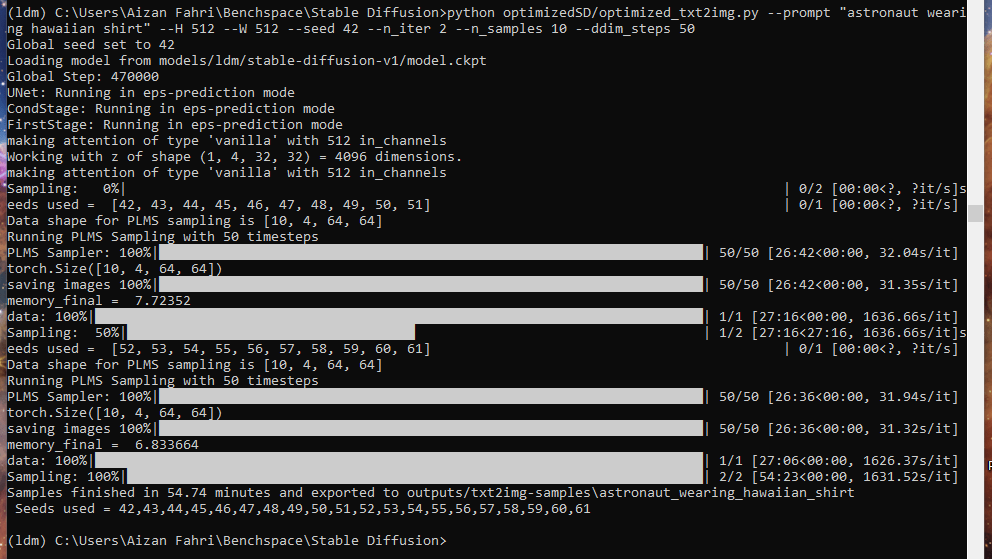 This clearly does not scale. And it did not work. 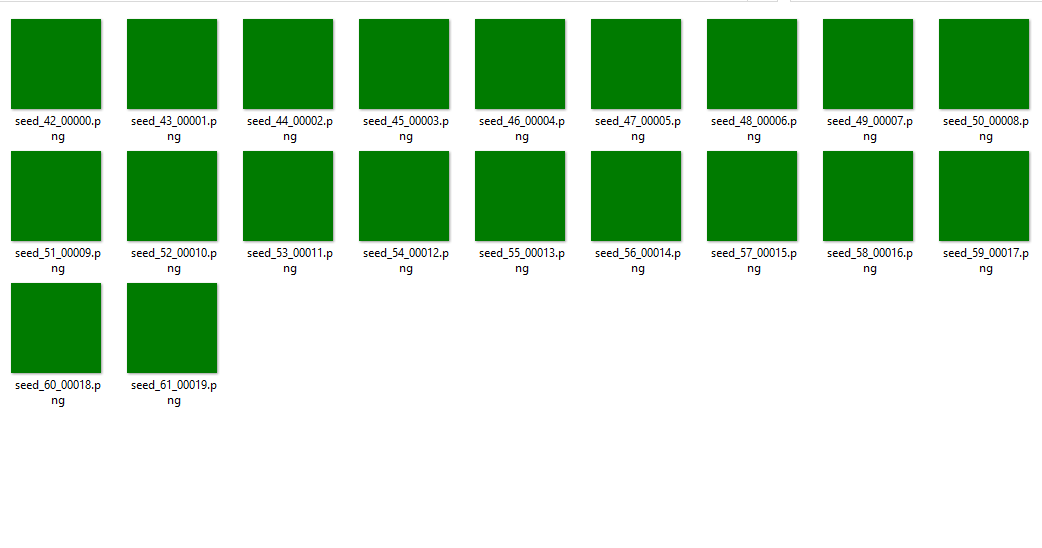 Not dissuaded, I tried again. This issue on CompVis/stable_diffusion repo suggested that --precision full parameter might help to resolve the green-only image output.

I tore down the whole thing and went to sleep. It was already 1:00 AM.

2 Cups of Coffee for Faster Run

At $9.99/month, Google Colaboratory feels very affordable7. I spent $5 for a cup of latte, so I guess this is a good investment8. But first, let’s try if we could use the free version without paying anything. 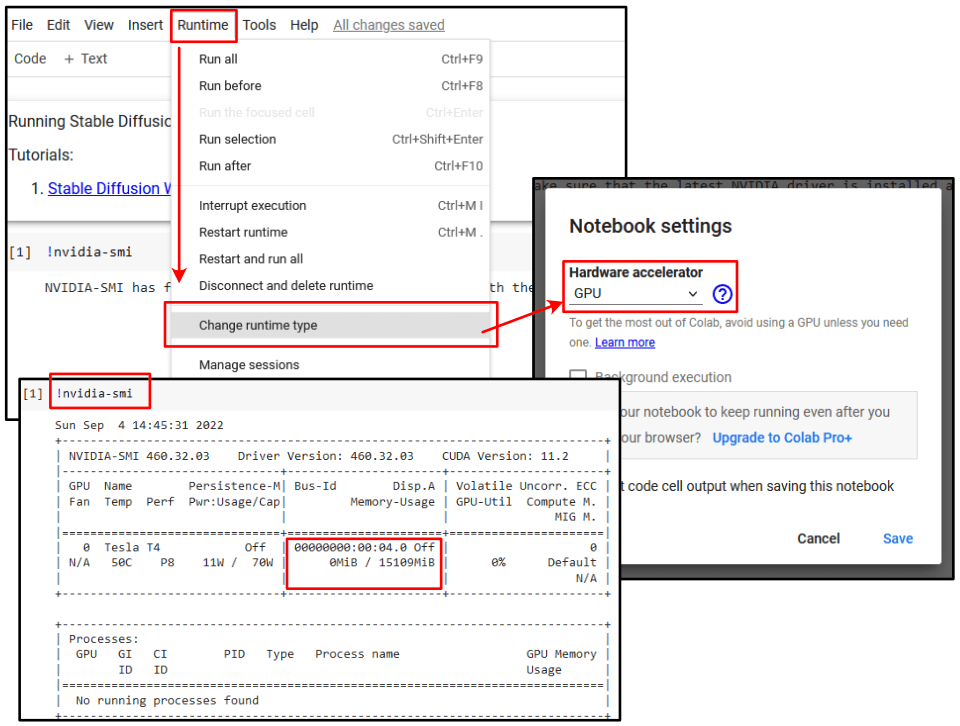 By default, a Colab notebook does not use hardware acceleration. I went to Runtime, clicked on Change runtime type, selected GPU as my hardware accelerator. Running !nvidia-smi (SMI = system management interface), I could see roughly 16GB of dedicated VRAM was allocated to my notebook. That’s a lot of VRAM. The actual card might not be really fast though, so I ran this command to check what kind of card I got.

It was a Tesla T4 GPU, a Turing-based card, launched in September 2020. This was not too bad then. Then, I basically followed these tutorials: How to Generate Images from Text with Stable Diffusion Models and Stable Diffusion with diffusers. As a quick note, here’s the GitHub repo for the diffusers python module. It simplified the whole installation process (assuming CUDA is available for Jupyter session).

All the prep work was done, time to try it

And… it took less than half a minute. 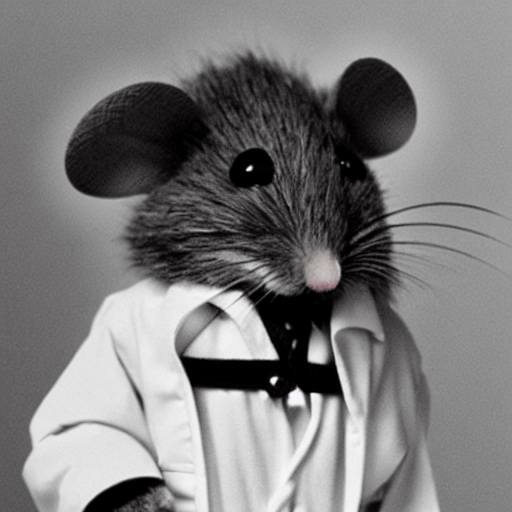 Stable Diffusion is cool, I had fun with it. I also tried DALL-E (OpenAI) and Mini DALL-E (HuggingFace). Even crazier, Stable Diffusion can now be used in Photoshop through alpaca, and I suspect similar innovations would follow soon. It is not beyond imagination that content creation platforms (e.g. blogging platforms) would start incorporating Stable Diffusion for image generation. AI content generation will surely be debated and discussed as its societal implication is truly massive.

Personally, I thought this was a fairly great learning experience on learning how to use Google Colab with GPU runtime. I dreamed of running UMAP with CUDA backend. My research data is in the multi-gigabytes territory with more than 14 parameters, comprising hundreds of million individual data points9.

Cannot wait to try it out now.