Currently I use Zotero as my personal reference manager. Previously I used Mendeley, but I once had a sync issues in the past, then I decided to make a switch to something else. I chose Zotero because it has been around for quite a while and it is an open source software.

I tried using Emacs with org-ref and helm-bibtex, I just could not find myself to feel comfortable using it.

When I first installed Zotero on my linux Ubuntu 18.04 LTS machine, I installed it through a PPA provided by Sebastiaan Mathot. It worked, but one thing bothered me. The Zotero update notification prompt kept on popping up, but couldn’t automatically update itself because of a permission error. The error happened because Zotero ran as $USER, but the installation directory was in root directory.

Since there has been no new update from the PPA, I believe it is safe to assume that Sebastiaan Mathot is kind of busy at the moment. But, this is not the end of the world yet.

Looking for a solution, I decided to download Zotero’s official binary from its website. Once downloaded, I uncompressed the tarball file, then I moved the folder to ~/.local directory and renamed the folder as ~/.local/zotero.app. It is my personal naming scheme, by the way.

Zotero’s main executable, which is zotero inside the zotero.app directory, has to have a proper permission to be run as an executable file. For that, I ran the chmod command on it.

To place it in $PATH, I created a symbolic link inside the ~/.local/bin folder with the ln -s command. Caution! The ln -s command requires absolute link, a.k.a full link beginning from the root / directory.

Now from my terminal, I can now simply run zotero to use it, but I also want it available via the main application menu. Usually, applications that are installed normally (either via apt or .deb file) will have a .desktop file inside the /usr/share/applications folder.

Since this Zotero installation is not what I would call as normal, a manual generation of its menu item is needed. For this, I turned to a package called alacarte, the Alacarte Menu Editor. 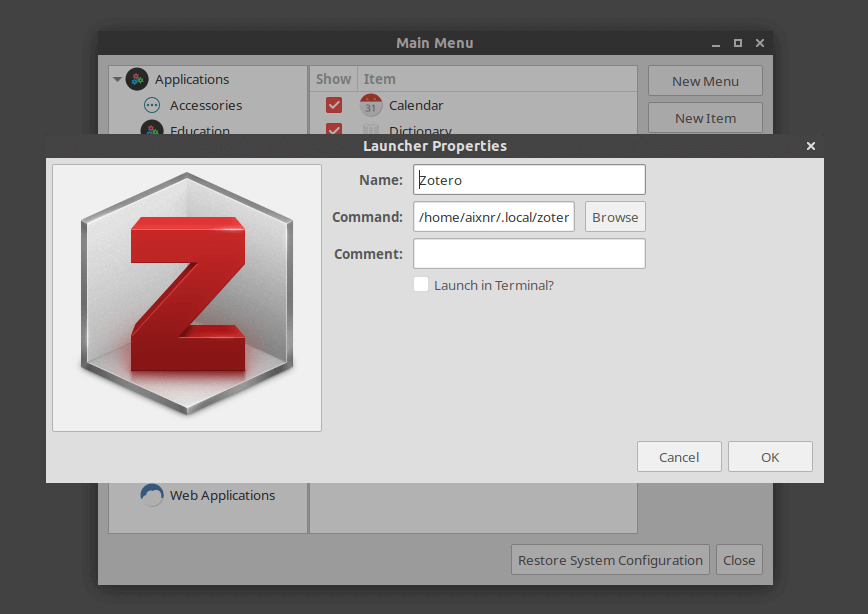 The icons for Zotero can be found in chrome/icons/default.

That’s it. Let me know if you have questions (Twitter: @aixnr)