Scientists say we need to be on the lookout for 3 deadly diseases caused by lethal viruses: Middle East Respiratory Syndrome (MERS-CoV), Lassa fever (LASV), and Nipah virus infection (NiV). Let’s talk about Nipah Virus because it is kind of special. It was discovered first in my country (Malaysia). Before we go further, here’s a short video clip on how NiV spreads, courtesy of PBS.

Yes, you just saw a fruit bat urinated. Worst, the fruit bat was actually urinating in a collecting pot where people collected the sap to be made into palm wine. If you want to read more about this, NPR has you covered. The purpose of this short article is to go through the story behind the discovery of this virus by Dr. Kaw Bing Chua when he was at the University of Malaya (UM) as a graduate student.

The outbreak of Nipah virus perhaps at first did not receive a considerable attention from the federal government. The federal government at first thought it was caused by mosquitoes (Japanese encephalitis virus, JEV), so they had mosquitoes protocol in place to contain the outbreak. However, Chua and a handful of people realized something did not add up: only those who specifically had contacts with pigs were infected. 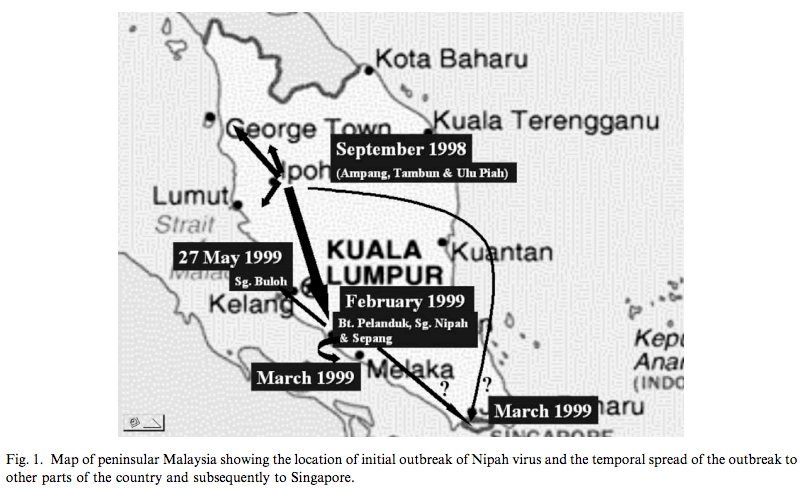 So how did the pigs got the virus? It turned out, pigs got it from bats. And human got it from pigs. If this does not sound scary enough to you, consider this: it is rare for viruses to jump into different hosts. Of course, there are some exceptions like the influenza A virus (IAV). But when they jump, they can cause very serious trouble like the Ebola virus (EBOV). However, this jumping thing does not take place overnight. It usually takes years, and often caused by deliberate contact.

In 2004, Chua published a memoir on Neurology Asia (The discovery of Nipah Virus: A Personal Account), telling the story about his discovery of the deadliest paramyxovirus. The disease caused a frightening illness: swollen brain and the disease progression was rapid. While the disease was ravaging people, Chua found some clues into the case but he was repeatedly ignored by the higher-ups.

Finally, Chua convinced the head of department that Malaysia was dealing with something that had not been observed before after he had gone through series of identification. Chua further convinced that an international assistance was crucial to containing the outbreak before it was spiraling out of control. Chua received a US Visa shortly afterward and he was scheduled to arrive at Fort Collins (CDC). Scientists at CDC and Chua finally nailed it down: it was a novel paramyxovirus, which means all the control measures against JEV was rather useless.

Chua ended his memoir with an advice: RT-PCR and serological assay failed him. I found 2 papers authored by Chua, both published in October 1999 and another one in 2003.

There is one more thing that I would like to add here. The NPR’s recent cover story on 1999 Nipah virus outbreak in Malaysia had a friend in my circle was a little bit agitated. What potentially made my friend a little bit upset that she thought Chua’s Head of Department (I will simply refer to him here as “the advisor”) being an incompetent mentor and had a poor attitude as the NPR story (probably) unintentionally visualizes.

In the memoir, it is true that Chua’s mentor dismissed him a number of times. The first few results were in the form of microscopic images (generated from, if I guessed accurately, optical microscopy) showing the formation of unusual viral cytopathic effect (CPE). This, as any busy person would argue, isn’t enough to describe a potentially novel pathogen. To sufficiently identify a virus, a virologist prefers electron microscope, and UM had an electron microscope that wasn’t well-maintained, producing blurry images.

Chua’s observation with the viral CPE didn’t specifically (1) tells it could be caused by a virus, (2) describes a new kind of infection, (3) specific enough to be considered as pathogen-induced. He needed to carefully look for new pieces, he needed to string new sets of observation to confirm his hypothesis. He needed something specific.

He then isolated/harvested antibodies from patients (blood serum and cerebrospinal fluid). I do not have a strong familiarity with the method, but I am convinced the immunofluorescence analysis he performed was specific and could be used as grounds to establish the finding of a novel pathogen. The advisor was surprised, convinced, and started to stitch together the missing puzzle pieces, although the advisor still had lingering doubts about a possible cross-reactivity. That is skepticism understandable and well-reasoned if you asked any scientist trained in the field of biomedical sciences.

One more thing that the NPR story probably unintentionally visualizes is the way the virus being transported. No, the virus wasn’t transported alive or attenuated, it was transported dead. The purpose of the travel to the CDC Fort Collins was to accurately visualize for viral identification and the gold-standard was the electron microscopy. Anything that needs to be visualized under an electron microscopy must be fixed, something similar like embalming. Chua carried dead cells infected with viruses, he didn’t carry alive pathogens so there was no safety concern here at all.

I hope this clarification helps.