VS Code is pretty cool, the VSCodeVim extension is also pretty cool. However, deep in my heart I’ve always felt that Vim could offer speed unparalleled to anything else. I decided to come back to Vim, but now with neovim instead of vim. I have heard good things about neovim, so I decided this would be a good time to try it out.

VS Code still has the advantage of being a text editor with some IDE capabilities. While it is totally possible to get an IDE-level experience with (neo)vim, the barrier of entry getting that to work with VS Code is lower than it is with (neo)vim. However for basic editing purpose and writing .md files or writing short bash or python scripts, (neo)vim is more than enough.

Ubuntu 18.04 LTS has nvim without adding PPA. However, it is quite outdated (as it is always the case for packages in the official repository), so I opted to download the official .appimage version (latest stable, 11 MB).

I downloaded junegunn/vim-plug to manage plugins.

The init.vim config, located at the ~/.config/nvim/init.vim, was initially populated with these directives:

The plugin system was then initialized inside an nvim session with the command :PlugInstall.

This list of plugins is mostly carried over from my previous ~/.vimrc configuration. For making sure that the vim-airline can display its fullest glory with the powerline/fonts, the patched fonts must be installed

Currently I am using Meslo LG S for Powerline Regular as my font.

Because there are simply too many of them, these are few that I frequently have hard time to commit into my memory.

Well, I would like to use it on my PC very much. A tutorial on HTG shows how to use WSL by using the X Window System Server for Microsoft Windows called Xming, and I anticipated that I would face challenges to set this up. An old tutorial shows that this is possible when connecting to the VM through an SSH session, so forward I went with the plan.

Note on X server:
I found out Xming was noticeably slow when starting up an nvim session, issuing delete command with d in nvim, etc. I then tried VcXsrv. The performance improvement was obvious, however, it crashed when I tried running GIMP (it now worked with Nix’s version of GIMP, but it did not work with apt version of GIMP, so mostly GIMP’s issue).

Another thing was that I specified the compression scheme for the ssh session.

I performed this operation inside a virtual machine running on Oracle VM VirtualBox. I prefer VM than WSL because I feel like I have more control. There is nothing wrong with WSL and I could see myself using WSL in the near future, given that the WSL v2 has marked improvements over the WSL v1.

Note on networking:
Previously, I was not able to use the host-only adapter. This time, per suggestions I read online, I installed VirtualBox by right-clicking and chose Run as administrator.

Prior to host system restart, I was not able to get host-only network to initialize inside the VM, but I could get it to work after a restart. I found out that when the subtitle of the host-only adapter being “WireGuard Tunnel” (pictured below), that was when I had this issue.

My solution was to have WireGuard running at the same time to prevent conflict (somehow that worked). Another simpler alternative would be using NAT with port-forwarding, which would skip hurdles associated with setting the host-only adapter up.

Somehow, only the first adapter (enp0s3) went up after boot. The second adapter (enp0s8) required a little bit of work, regardless being either NAT or host-only. This could be easily automated with crontab with root privilege after booting.

I started with minimal headless Ubuntu installation and went from there. At the Software selection dialog during system installation, I selected OpenSSH server package only. At the end of the base installation, I exported the VM as ova image so that I do not have to install the whole thing from scratch again (total size was 1.05 GB).

Since I decided to use NAT-only for the networking, I set up port-forwarding to allow access from the host into services running inside the VM. 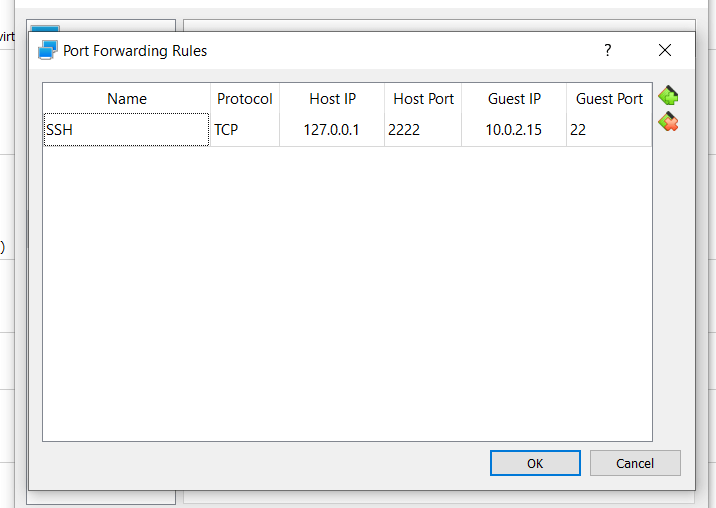 I started a git bash terminal and prior to ssh-ing into the linux box, I set the DISPLAY variable pointing to VcXsrv, and then I ssh'ed into the box.

To make it easier to run applications within guest (detaching it from stdout):

I also enabled folder sharing from host into the VM. Configuration is mostly done on the GUI of the VirtualBox. 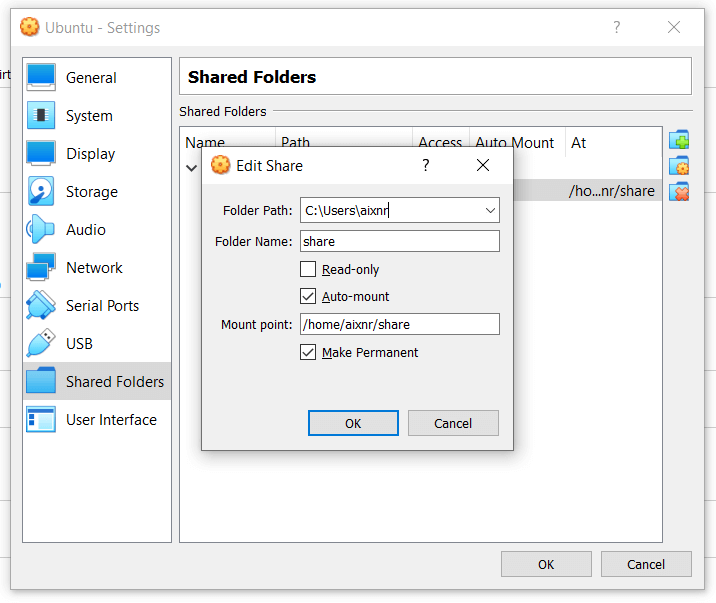 I did try cygwin before to use my favorite CLI tools. However, it did not feel as immersive compared running the tools within an actual linux environment. I think this is the reason why macOS would be a logical choice for people that want the best of both worlds: painless aesthetic and the power of unix environment with CLI tools (mostly available through homebrew).

My only regret with my headless Ubuntu setup is that I only set the disk space at 10 GB only. Should have gone with 15 GB or beyond.