First time doing mice experiment, so here I am writing notes on what I could improve.

Currently I am being trained to perform experiments with tissue samples extracted from mice, mostly alveolar macrophages. Specifically, I am dealing with C57BL/6 strain, commonly referred to as Black 6 mice.

And here is the problem: downstream experiments require large amount of cells to make experiments feasible, usually in the order of 1e5 (100,000) to 1e6 (1,000,000). My most recent extraction gave me 80,000 (so that’s close 1e5), but not good enough. I’ve read somewhere online that a mouse can give around 300,000 alveolar macrophages. Clearly I need to improve there.

Briefly going over the extraction protocol:

I am doing bronchoalveolar lavage fluid (BALF) extraction to collect the alveolar macrophages. Euthasol (pentobarbital sodium and phenytoin sodium) is used to put down mice in most humane, painless, and rapid euthanasia. It is crucial for mice to die as quickly as possible as to not cause any pain or distress.

When it is confirmed that the mouse is no longer breathing, the upper chest is cut open to gain access to the trachea. A small hole is nicked (ideally) on the upper part of trachea to insert a cannula that is attached to sterile syringe. 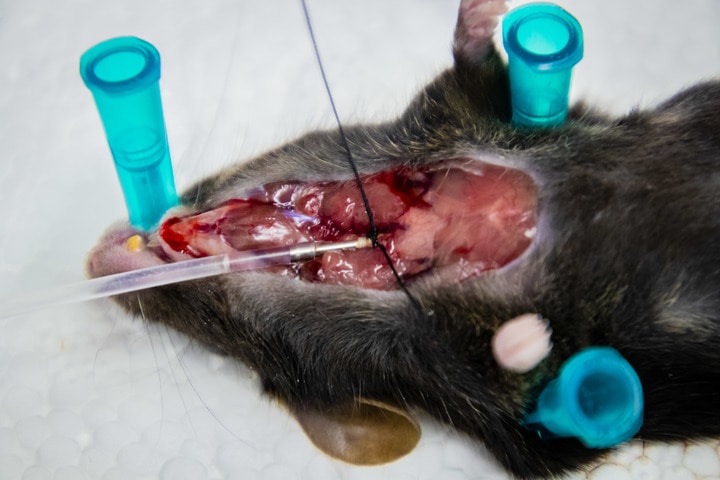 An extraction to get BAL fluid.

For a typical BALF extraction, 4-5 ml of buffer (discussed down below) to obtain a maximum amount of lavage. One way to do this is to use two syringes connected to a stopcock. 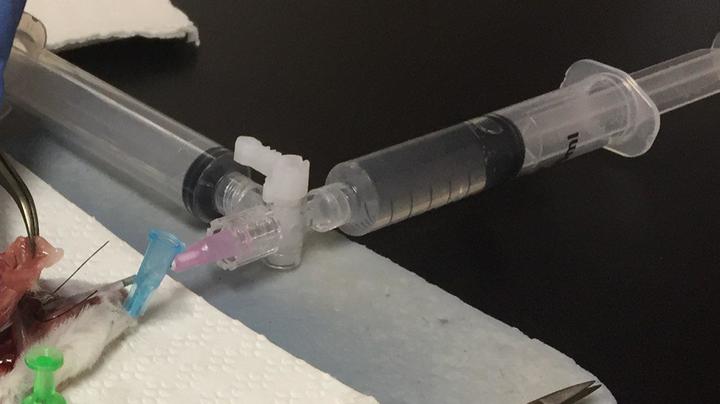 Stopcock with 2 syringes to wash and collect.

It is important to make sure that it is a closed system, meaning that buffer should not leak out during extraction. If it is not a closed system, the moment we push the buffer into the trachea, it will leak out, and we will get nothing. One way to do this is to tie the cannula with suture thread, and tie it very tightly but carefully (see the first picture above).

According to a paper published in Immunity by Yu et al., this special buffer (which can be made in Dulbecco’s PBS) contains 0.5 mM EDTA. Some people add sugar (1%) and antibiotics (Gentamicin 0.35 mg/ml).

Leakage. When I first started extracting macrophages with 5 ml buffer, I first expected around 4 ml extraction (more or less). Unfortunately, I got a little less than 3 ml, sometimes only 2 ml. That’s not good, the buffer was leaking out somewhere. I figured out that it was because the cannula’s metal tip was kind of long it pierced the bronchus. I fixed that by inserting the cannula’s metal tip halfway through and tightened it tightly with suture thread.

Low macrophage count. I talked to my rotation PI and he told me that 80,000 macrophages/mouse is not that bad for a naive mouse. It would be a different story if mice were infected or had lung inflammation prior extraction.

I will update this entry with more stuff if I stumbled into tips and tricks that can improve this procedure.