I had an idea.

There was an anime that gave quite an impact to me. The anime was Dr. STONE, rated at 8.42 on MyAnimeList (MAL), which is impressive. For comparison, Attack on Titan is scored at 8.44 while Sword Art Online is scored at 7.39.

Dr. STONE is not a generic shounen anime that probably some of you are familiar with. I like it because of its emphasis on the process of scientific discovery. The show exemplifies quite nicely that science is difficult, is a communal effort, and necessary to build a strong civilization. Well, as an avid science user myself, I am biased haha. 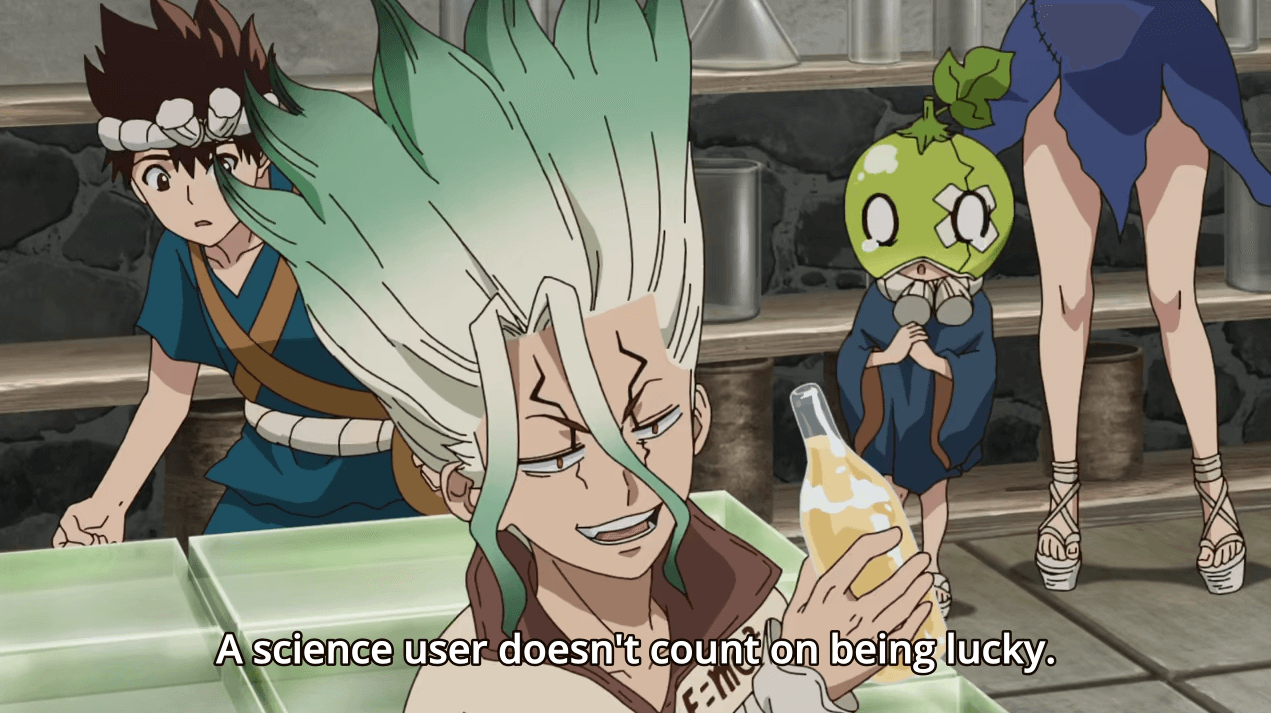 This is the complementary article to provide insights on the process of generating data for a long-form article on my primary Caspershire blog. This blog post concerns about the process of extracting data from the show, in particular searching for specific keywords from the subtitle file. I was interested in the occurrence of certain keywords such as science for example.

Let’s have some fun!

To extract subtitle from an MKV file, I could issue the following command with ffmpeg:

To automate the whole process for all 24 episodes, I wrote this bash script.

I opened the output subtitle .srt file and I saw a bunch of HTML tags.

To remove the tags, I added the following line to my bash script above right after extracting the subtitle from the video to remove HTML tags with sed.

At first, regular expression (RegEx) did not make sense to me and I believe I am not the only person struggling to understand RegEx. So I made this illustration to help with my understanding I hope it would work for you too. The grayed out code is the command syntax for running sed: s/ to perform substitution followed by a search string (which is our RegEx code), // after the RegEx means to substitute the search string with nothing, and g at the end is to run the process globally (find every single of them).

As a side note, the website RegEx 101 is a great place to write and check your RegEx code.

This part really depends on desired resolution of the data points. If I would like to know how many times the characters said the word science per episode, that would be easy. Just count the occurrence of science in an episode and call it a day.

But that would not be challenging, would it?

So I decided to make it wee bit more interesting: parse the .srt file by turning it into a Pandas DataFrame object, 1 column for the start time and another column for the text as the bare minimum. Let’s take another look at the subtitle again.

This is known as the SubRip format, comprises a numeric counter, the time it should appear and disappear, the subtitle text itself, and a blank line to indicate the end of a subtitle (dialog) block. Now I know that the subtitle block is split between an empty line, I could use \n\n as the block separator.

The following output was generated.

It looks very manageable now, actually. I could split 1 block into different units (i.e. numeric counter, time, and text) by using the \n as the demarcation. The problem with this approach is that some of the subtitle text have internal \n, so the text would get split. Thankfully, the string .split() method can take an argument to specify how many splits are needed.

To remove \n in the text, I used string .replace() method

To turn this into a Pandas DataFrame, I wrote this function based on the code above. 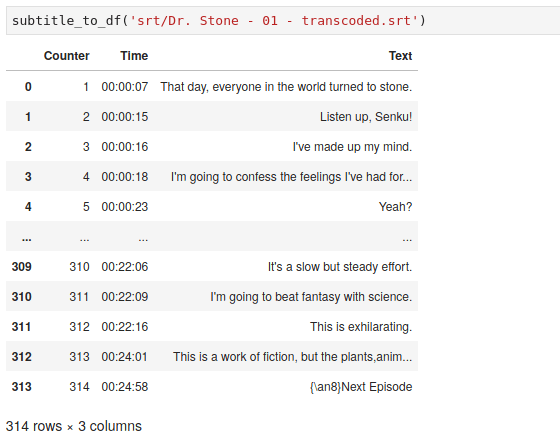 Great! Life is easier now. All of the subsequent operations would be done on this DataFrame object. For example, I would like to find dialog where the word science is mentioned, I could do it in two lines with lambda expression.

String search is case-sensitive and that is the reason why I made sure everything was in lowercase beforehand. If not, I had to run two separate queries to get the keyword Science and science. Now that the basic flow was sorted out, I switched gear and queried the keyword for the whole season 1 of the series (all 24 episodes). For this, I needed to do some walking.

The subtitle files that were extracted before with ffmpeg were placed in srt/ directory. To use the combinator() function which takes 1 argument that is the directory containing subtitle files, I ran this:

And it returned this DataFrame. 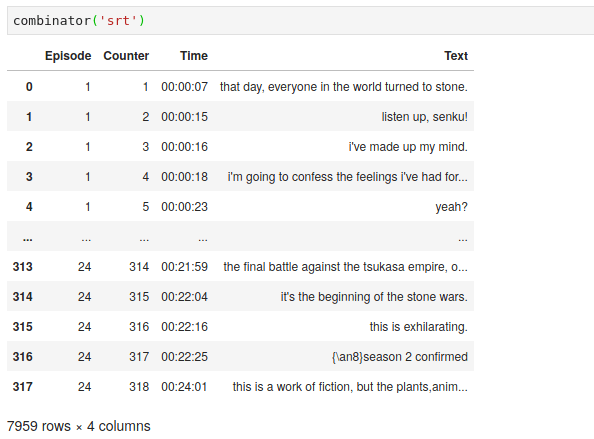 Now, everything was in a single place, I went ahead and plotted the data. 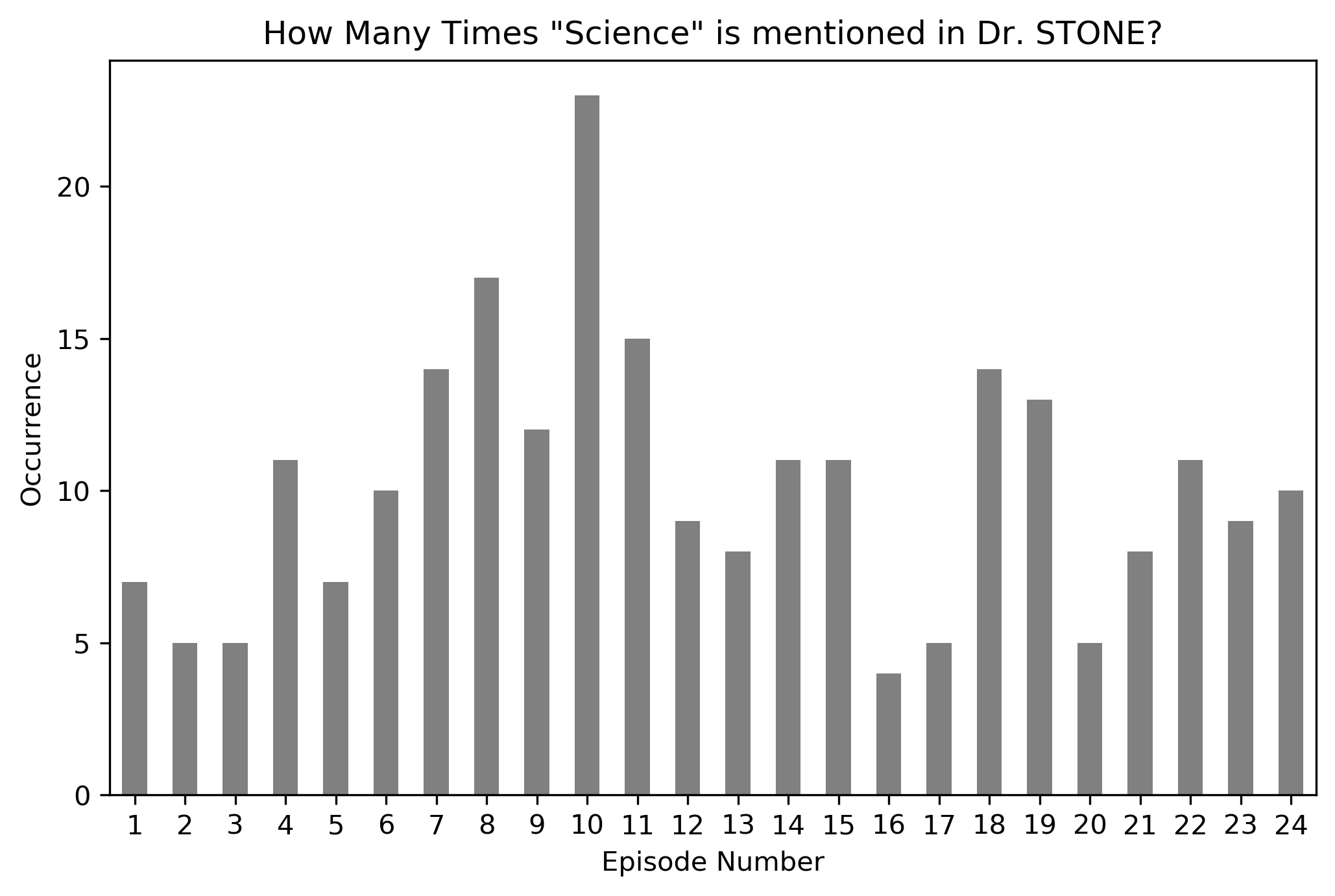 Great, I got the code to work and I got some data now. Then I got curious why episode 10 had so many mentions of science than other episodes, so I started looking around. It turned out that episode 10 was sort of a flashback episode where Senku got hooked up with science since he was very small; while everyone else was learning how to perform simple arithmetic calculations, he was already learning how to play with Einstein’s equations.

Speaking about Senku, I was interested to see if there is any correlation between the keyword Senku and Science, and tried to make a correlation plot. The code for this is available on my GitHub repo for Jupyter Notebooks: aixnr/jptrnb. 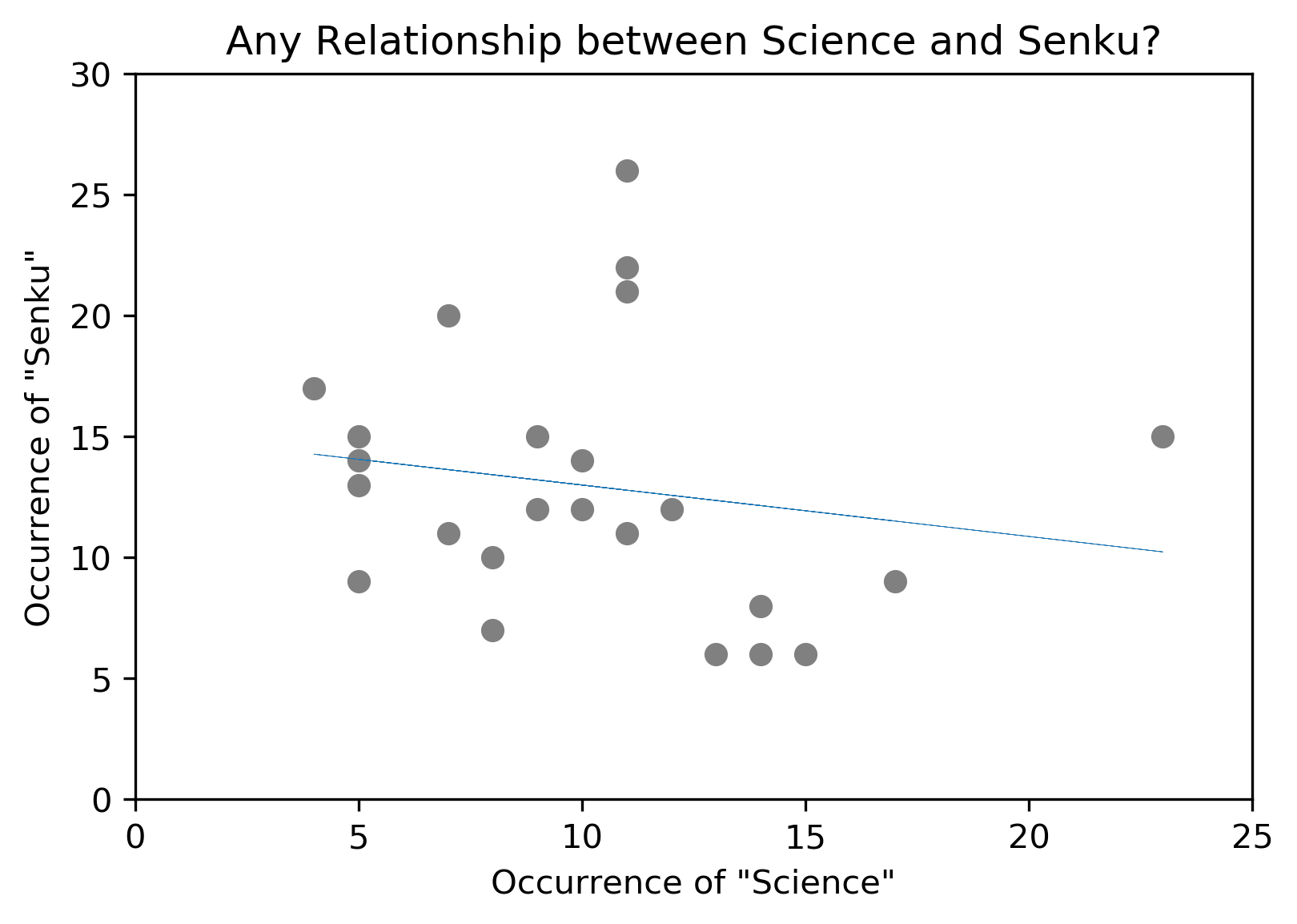 It does not seem to be any correlation between both search terms, but that is fine. On the technical side of things, I used to use Seaborn for making correlation chart, but this time I just went ahead with bare minimum: matplotlib and np.polyfit(). I think I like Seaborn’s chart better, appearance-wise.

Should I Stop Here?

Now, I decided that the party should not stop prematurely.

Since I know the time frame when science got mentioned, I decided to try to programmatically get a screenshot without using any video player, just a scripted ffmpeg approach. The base command looks like this:

Does not seem too difficult now, does it? Adapting my previous code for extracting the subtitle file, I wrote this script, called it screenshotter.sh:

I issued the following command:

As a quick note, I usually added 1 or 2 more seconds from the time to appear to account for a slight delay.

Why did I do this?

As I said before, I was writing a long-form article on my thoughts about this anime. In the grand scheme of things, I am also interested in text mining approach because I could see how this would help me with my research. What kind of help would that be? I do not know, but must be something, right? RIGHT?